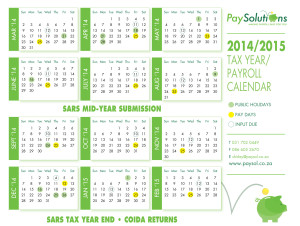 COIDA Return due by 31 March annually

The Payroll Year runs as per the SARS Tax Year that is 1 March to end of February each year. Our Payroll calendar is for this Tax Year 1 March 2014 to 28th February 2015.

A weekly wage payroll year can vary depending on the number of pay periods in the year. Either 52 or 53 pay periods.

A  Fortnightly payroll year can have either 26 or 27 pay periods.

The weekly and Fortnightly payrolls often do not start on the 1st of March; the start of the payroll year could be the last period of February or sometime into the 1st week of the new Tax Year.

Our Payroll Services Calendar for the 2014/2015 Tax Year, feature the following:

Please note that Wednesday 7 May has been declared a Public Holiday for 2014 only. This is Voting Day

The South African Public Holidays are as follows:

The calendar featured in this article is for a monthly payroll. Should you require a calendar for a weekly or fortnightly payroll, please contact us and we will be happy to furnish you with one.