Part 3 – We continue on the topic of  Equal Pay for Work of Equal Value – Its time to close the Gap! 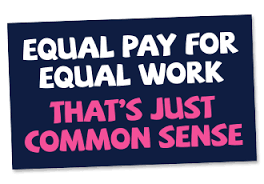 6.1. Discrimination in pay /remuneration based on the sex of employees is an international phenomenon found to a greater or lesser degree in all countries. The ILO has suggested that due to –

6.1.1. stereotypes with regard to women’s work; 6.1.2. traditional job evaluation methods that were designed on the basis of male dominated jobs; and

4 6.2. The use of job evaluation does, in itself, not ensure that there is an absence of unfair discrimination.

6.2.1. It is acknowledged that traditional job evaluation methods were designed on the basis of male -dominated jobs.

6.2.2. Predominantly female jobs often involve different requirements from those of predominantly male jobs, whether in terms of qualifications, effort, responsibility or working conditions.

6.2.4. It is important to be vigilant when selecting the method of job evaluation and to ensure that its content is equally tailored to both female -dominated and male- dominated jobs. For instance, responsibility for money or equipment is often valued more than other forms of responsibility.

6.2.5. Jobs involving caring for others or cleaning may be undervalued because of the erroneous assumption that the skills involved in these jobs are intrinsic to nature of women and not acquired through learning and experience.’

6.5. An employee may base a claim on the ground that they would have received higher pay /remuneration if they were not female. To succeed in such a claim, the employee would have to show that a male employee hired to perform the work would have been employed on different terms and conditions of employment.

7.1. Once jobs have been evaluated and/or graded, the various jobs are allocated pay /remuneration packages in accordance with the pay /remuneration philosophy of the employer and the value of the jobs. Employers are required to ensure that unfair discrimination does not occur at any of these stages.

7.2. Where employees perform work that is the same or substantially the same or is work of equal value, a difference in terms and conditions of employment, including pay /remuneration, is not unfair discrimination if the differentiation is not based on a listed or on any other arbitrary ground in terms of section 6(1) of the Employment Equity Act, as amended.

7.3. Regulation 7 of the Employment Equity regulations lists a number of grounds which are commonly taken into account in determining pay /remuneration. Subject to what is stated below, it is not unfair discrimination if the difference is fair and rational and is based on any one or a combination of the following factors –

7.3.1. the individuals’ respective seniority or length of service;

7.3.2. the individuals’ respective qualifications, ability, competence or potential above the minimum acceptable levels required for the performance of the job;

7.3.4. where an employee is demoted as a result of organisational restructuring or for any other legitimate reason without a reduction in pay /remuneration and fixing the employee’s salary at this level until the pay /remuneration of employees in the same job category reaches this level;

7.3.5. where an individual is employed temporarily in a position for purposes of gaining experience or training and as a result receives different pay /remuneration or enjoys different terms and conditions of employment;

7.3.6. the existence of a shortage of relevant skill in a particular job classification; and This gazette is also available free online at www.gpwonline.co.za STAATSKOERANT, 1 JUNIE 2015 No. 38837 13 7.3.7. any other relevant factor that is not unfairly discriminatory in terms of Section 6(1) of the Act.

7.4. These factors may not be used to determine pay /remuneration in a manner that is biased or indirectly discriminates against an employee or group of employees based on a listed or on any other arbitrary ground in terms of section 6(1) of the Act.

8.1. The following process may be used to determine equal pay /remuneration for work of equal value –

8.1.1. determine the scope of the audit to be conducted to identify inequalities in pay /remuneration on account of gender, race, disability or any other listed or on any other arbitrary ground;

8.1.2. identify jobs that would be subjected to the audit;

8.1.3. ensure that job profiles or job descriptions exist and are current before evaluating jobs;

8.1.4. utilise a job evaluation and/or grading system that is fair and transparent and does not have the effect of discriminating unfairly on any listed or arbitrary ground;

8.1.5. compare jobs that are the same, similar or of equal value in the employer’s own organisation or company. This should include comparing female -dominated jobs with male- dominated jobs as well as other jobs that may have been undervalued due to, race, disability or other discriminatory grounds;

8.1.7. identify the reasons for differentiating in pay /remuneration as contemplated by Regulation 7 in the Employment Equity regulations and determine whether they are justifiable;

8.1.8. where differentiation is found not to be justifiable, determine how to address inequalities identified, without reducing the pay /remuneration of employees to bring about equal remuneration; and

8.1.9. monitor and review the process annually